Just this one factoid during pandemic year tells you all that is required about this government’s opportunism and insensitivity regarding its own citizens. From April 2020 it has been clear that oxygen was the premier lifesaver and the most precious commodity in Covid times bar none. Now, with oxygen requirements skyrocketing beyond expectation, with horror stories emanating on larger and smaller scales, this merely is another pointer to what the so-called largest democracy in the world has been reduced to, by the criminals given charge of it.

Even worse, the Govt. tried to wriggle its way out of this (a mere embarrassment for those thick skins, nothing more) by shrieking that it was industrial oxygen (a blatant lie, as it was liquid oxygen, for both industrial and medical use). In any case, even the courts just gave an order that all industrial oxygen manufacturers should switch to produce medical grade oxygen with immediate effect, which is apparently easily done. This reliance on fakery and quasi-sophistry is complemented only by this government’s diehard supporters, still shamelessly prattling on about fake news and blaming the states for dropping the ball. I know some of them are seeing this so just to say – your curtain of respectability is about to fall resoundingly – hope you’ll be suitably dressed for the reprisal, when public anger overflows. Not if; when.

Modia, our sold-out media – is no better, of course, given the way it covered the moment where a CM chose to publicly show his desperation (of oxygen not reaching him due to intervention from other state police) in a meeting of the PM with the CMs, the media choosing to focus on the CM’s break from protocol rather than the national crisis rapidly unfolding. Interestingly, so many people are unable to neutralise the identity and its attendant baggage to see that moment for what it really was – a real sign of our times.

It was all going according to the playbook in India – the pandemic had palpably receded, demanding more measures for normality. But certainly not by dropping guard and enabling massive super-spreader events. The two India-England cricket matches in Ahmedabad, where 120,000 people saw the matches in a new stadium that needed to be shown-off by the establishment or the millions who attended Maha Kumbh (currently responsible for the mayhem in UP and prime nodal hub Delhi) that was actually brought forward by a year due to astrology – the common thread between both these states needn’t be stressed on – UP, Gujarat and Delhi now are by far the worst-affected Covid regions in India (with only one among them reporting true figures). Maharashtra, the only outlier in India till March 2021 for its abnormally high death toll, saw its second surge (or peak, not wave – that is a misnomer, as undulated mountains are not waves – but this is not the time for semantics, of course) commence with election rallies in Nagpur. Bizarrely, the next two IPL legs in Delhi and Ahmedabad are not being moved anywhere else, despite talk of the new strain being airborne. Hope the bubble will indeed suffice.

Blaming common people for dropping the ball is convenient and misleading when actually things were working out well, and full normality was within grasp. By the same token, how difficult is the decision to go to vaccination centres now – given that physical distancing (the most effective way to fight this) is largely non-existent there, thus making them the biggest infection hubs currently? The mad rush there currently (after the May 1st general vaccination announcement) is beyond scary and may well prove to be counter-productive. If you must go, please take double protection, for whatever it is worth, and strive for as much physical distancing as possible.

Given that this appears to be a new mutation creating havoc, the situation in India will probably go one of two ways now.

One, if the new mutation means that both the vaccination and the precedent of being already infected do not prevent re-infection, then 2021 is set to be a much, much worse year than 2020 (it already is that for more than a few).

Two, the more optimistic view (mine too) – this mutation will not affect the status of the vaccinated and the already infected. This would then be the last Covid storm here because the numbers of those two categories together means actual herd immunity is not far. This will vanish as quickly as it appeared which is what happened in Pakistan in July/August 2020, where things were looking horrifically dismal for a while (though there is a slight surge now again there, hopefully temporary and not out of control). However, it should be remembered that Pakistan resorted to localised lockdowns then, not prolonged universal lockdown as we have now, as the latter seems to prolong the cycle. The option of a no-holds-barred lockdown being the first option rather than a last resort sets a precedent that will probably haunt us later, even beyond Covid.

A third mutation in the B.1.167 strain also means this is now a new situation that is disconcerting also for the deaths among the young – a considerable departure from the past. Lung damage and blood clots are more prominent symptoms now being spoken of but equally, many are suggesting repeatedly that many of those deaths could have been avoided if oxygen had been handy. Bringing us back to the main point again.

There is no bigger proof that the excess load of pointless information on the human mind is leading to an overall swift decline. If we had focused on death tallies instead of cases from the beginning, and used our energies to prevent deaths as the top priority, the availability of oxygen would have been absolutely top-of-the-mind as well. If you don’t know that story, please google “Gaurav Rai, Bihar” and see the results of what just a small individual rising to that challenge can do, let alone the might of the state. Why and how Pradeep died? (Journalist-The Hindu Group) 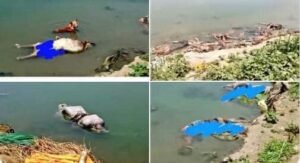 The panic situation in covid 19…