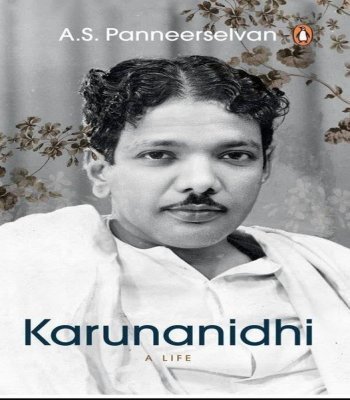 This is a phenomenal book – extremely well researched and eloquently written.

I am a Telugu-mother-tongued Tamil person living in Chennai. I am a non-Brahmin but have always been fed a Brahmin-centric media diet in Tamilnadu (Vikatan, Kalki, The Hindu, and Thuglak) in my formative years. I have not heard any praise about DMK, DK, or Karunanidhi from the media or the people around me.

It took a lot of time for me to realize the works of Periyar in Tamilnadu. But even in Dravidian circles and Left-centric media, Annadurai and Karunanidhi are not recognized at all. I have heard people abusing them because they are corrupt, indecent, violent, and blah blah. But the narrative about MGR and JJ was different. I was told MGR and JJ are heroes, but DMK and Karunanidhi are the villains. I am sure the popular narrative is built around this even now. JJ is a strong lady with great conviction; MGR is a good-hearted man with great compassion for the poor and social upliftment. But Karunanidhi is corrupt, sly, nepotistic.

For the economic revolution that has happened in Tamilnadu, the story goes like this. Kamaraj was the kalvi-thanthai, MGR brought in the mid-day meal scheme, JJ ably administered the state which bought so many industries and set up the economic revolution in TN. All Karunanidhi did was squander the wealth, built Sun TV media empire, 2G scam, and did “scientific corruption.”

But the story didn’t add up for me because of this. The Congress party led by Kamaraj went out of power in 1967. MGR was in power from 1977 to 1987. How did magically the TN transform in these decades? None of the popular narratives gave a good answer for this. I could see more stories spun out on MGR and JJ but not one credible story of Kalaignar.

This book is a great window to understand the history of Tamilnadu, the uprising of the Dravidian movement through the life of Kalaignar Karunanidhi. I learned the following:

1. Why was it necessary to be part of electoral politics to realize Dravidian principles’ ideals? How momentous is the task to face the machinery of government to implement the principles?

2. How masterfully Kalaignar captured his audience through the mass media of cinema? How thoughtfully he rode and the wave of cinema but transformed it for disseminating his views and principles? He did the impossible task of growing an audience when Brahmins and Congress sympathizers controlled the popular media.

3. What is the difference between “compromise and conciliation”? Kalaignar never compromised his principles but reconciled with the broader institutions to move forward. To a reporter who questions, “Are you left leaning or right leaning?”, Kalaignar, who rarely speaks in English, quips: “We are always in the front.”

4. What I learned from this book is his statesman-like view of things. While Periyar demanded Dravida Nadu, Anna and KK used Dravida Nadu as leverage and bargained for more power to the states. He envisioned the same for Srilankan Tamils, but things went beyond his control. I truly appreciated the chapter on his nuanced approach to Srilankan Tamils, but almost everyone in India and the media failed to understand it. I was very impressed by the emphasis on E-minus-D-plus-plus strategy with the Srilankan Tamil parties (no Eelaam but move Devolution of power).

5. I came out of this book with immense respect to Murasoli Maran, who rightly was the conscience of DMK from the 80s. Of course, Kalaignar has made mistakes and miscalculations in electoral politics. His downfall in his last decade, dispute with the Marans, and the Brahmin dominated media’s effort to build a narrative against him. The author correctly points out his follies and doesn’t paint with any rose-tinted glass. But we all overlook the massive impact he has had in Tamils’ life and always downplay it.

6. Many leaders are Teflon in nature. Trump or Modi are not always held responsible for any mistakes. (DeMo was a good try, COVID is a problem at the state, etc.) But Kalaignar is actually a non-Teflon leader. People always malign him and never want to appreciate him. But MGR and JJ are Teflon in nature. People ignore their atrocities or incompetency and see a way to valorize them. (See the popular movie Iruvar or the Tamil TV series “The Queen” or the upcoming movies like Thalaivi, which will be villainizing him.). I felt a bit ashamed to view him always in a bad light and thinking highly of JJ and MGR and their impact. Now I understand Brahmin-dominated media’s power (with the likes of Cho Ramasamy and SS Vasan) shaping the narrative of Tamilnadu but consciously editing DMK and KK out of it.

7. How the seeds for affirmative action and social justice were planted early in the political minds of Tamilnadu by the Justice Party? How KK was a true flag bearer for the Dravidian principles but shunned away from the radical methods of Periyar or Communists. He shrewdly understood the leverage he had, and like a true Stoic, he changed only what he could change. He did a damn great job with it by working within the constitutional framework and demanding devolution of power.

8. How does the economic liberalization of 1992 impact the Dravidian principles? He really thought hard on this and reworked it based on reality. He took a unique route of combining “social welfare” and “embracing the market/technology by industrializing.” The Left denounced him for his pro-market moves. He was denounced by the Right for his social welfare moves. But he was steadfast in his views and marched forward.

If you want to understand why Tamilnadu is different, why we have strong opinions about Hindi imposition or NEET or reservation, you need to read the book. Or if you simply want to know why we don’t have assholes like Arnab Goswami in Tamil news media, this book has an answer for this.

If you are someone like me: Who respects Periyar but had viewed DMK and Kalaignar with skepticism, this book is for you. If you believe the answer for social welfare is in the Left and the principles of Marx, this is a story of an intellectual who has done a great experiment in the Indian context and succeeded in it. You should read it too. 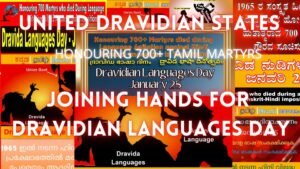