We were waiting for something like this for so long now. Maybe a decade or more.  Finally, M.K.Stalin is the CM of TamilNadu, or to say in his own words, Muthuvel Karunanidhi Stalin is now CM. Why this change of government considered a breath of fresh air? Not only fresh air but like oxygen for the dying, withering state rights?

After Modi, a totalitarian with extraordinary ‘reading’ and acting skills came to power, the need for a strong backbone in a state government rose much more than ever. If Indhra Gandhi’s emergency was temporary and a result of personal ego, RSS-BJP’s emergency is a perfect example of a systematic, organized emergency. No power to the people, no rights to the people, Media behaving like Government’s guardian dogs, Camps for the minorities what not?  Modi’s idea of New India can only be compared to that of Hitler’s idea of New Germany. And one must not forget the deep-rooted similarities RSS has with the Nazis.

When everyday news was serving depression to people who believed in Individual rights, state rights, and social justice the change of Government in Tamilnadu has given enormous energy. We should also mention Mamta and Pinarayi here. At the same time, though all these three are hailed and weighed as one and the same, Stalin deserves more respect and more praise. Because unlike Mamta and Pinarayi he was not controlling the state. He, as an opposition party leader, had to face enemies from all four sides. The ‘shameless and notorious’ central government, the ugly state government that was run by Edappadi (Pazhanichamy) the state’s one-sided media, and not to forget, the election commission.

So now for time being, let us forget about the long-term goals. Stalin, as a CM is facing more challenges than Kalaignar had ever faced. He has sworn in as CM just when the pandemic is at its peak, and the saffron pandemic that has been occupying the center for like 7 years now has only added to the distress. So how is the new Government handling the crisis? How are the people reacting to it? One can take a tour in social media, which is a fort of so-called centrists and politics haters who have a history of blaming all parties are now all praise to Stalin. No rest to meme-makers who only had criticisms towards him are full of praise now. The way he and his ministers handle the situation is quite astonishing, and after a very long-time people are starting to believe the government they elected. The 69Cr rupees collected for covid relief under CM relief fund says it all. Edapadi could never do this. On the other hand, one cannot stop comparing how secretive Modi’s PM care is and how transparent Stalin’s ‘Real Care’ is.

I think for a government to tackle such a situation, it is essential for the Government to earn the respect and confidence of the people. Stalin’s governance had achieved it in a very short span of time. What years of articles supporting DMK could not do, just 10+ days of Stalin’s governance has done. Free bus for women & transgenders, 4000rs as corona relief fund, the way lockdown is being handled, the strict instructions to police and politicians on how people must be treated respectfully, the decision to import vaccines directly from manufacturing countries and so on have created a tremendous impact in the very fabric of the political belief system of the millennials and in a very short span DMK is their favorite party and Stalin is their favorite leader.

Not only this. Stalin is showcasing an attitude that’s very new to Tamil Nadu. The ADMK which has an infamous history of treating its opposition with zero respect is now treated with respect by Stalin. Be it how OPS was treated during the swearing-in ceremony or how EPS has been allowed to retain the bungalow allotted to him by the TN government, a new history is made here. CM Stalin, though governing with a complete majority could easily take decisions on his own. But he never failed to ask opinions from his political counterparts including the ADMK. To see such a democratically flourishing government gives people confidence that they have handed over their state to a very responsible leader.

To put it in a nutshell, Cinema enthusiasts compare Stalin’s governance to the one we got to see in Mudhalvan. (Nayak in Hindi)Mudhalvan, a complete commercial take on politics written by Sujatha with zero realism is nowhere to be compared with Stalin’s real-life ‘Mudhalvan’, which one might say is written by Periyar and directed by the principles of Anna and Kalaingar.  And I can confidently say that the ‘politically correct’ Mudhalvan ruling TamilNadu now, is not only here to rule but he is determined to stay for decades to come and achieve the Great Dravidian dream aka State autonomy!

–
Disclaimer: Views expressed in the content belong to the content creators and not the organization, its affiliates, or employees. 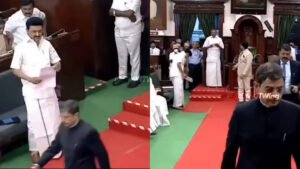 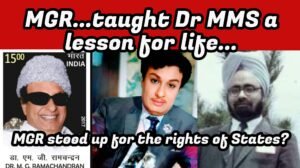